Writer Kuen Shan: The cat who loved me

Kwong Kuen Shan talks about the cat who banished her feline phobia and inspired her to start writing. 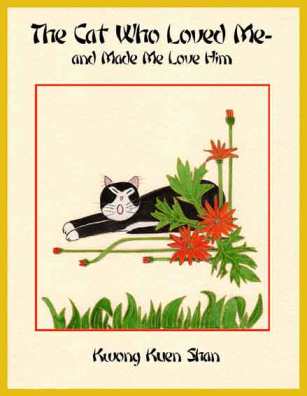 The artist and writer Kwong Kuen Shan is a self-confessed former cat phobic. “I feared everything about them,” she tells me brightly, over a cup of morning tea in Waitrose. “It was a very serious phobia and I spent most of my life trying to avoid the beasts.”

The irony is that this same woman is the author of the recently published book, The Cat Who Loved Me. It is an account of the path her life has taken and the unexpected intrusion of a farm cat called Healey – who not only cured her of her phobia but also inspired her to begin writing.

“Without this cat, I would never have started to write books,” Kuen Shan says. She leans forward, giving a little smile. “You know, Healey adopted me and I hated him. I ignored him, chucked him out, that sort of thing. But then, he won his way into my heart.”

And it didn’t stop there. The more Kuen Shan saw of Healey, the more intrigued she became. “He tenaciously adopted me; he was just there all the time. I realised, ‘Hey, cats are very philosophical animals’ and so I began linking cat behaviour with Chinese philosophy.”

Cats began to appear in her artwork, too. “I never paint cats I don’t know because it’s cold,” she says. “Every cat I’ve painted I have met.”

Kuen Shan grew up in Hong Kong where she studied Chinese literature and philosophy. She is a professional Chinese brush painter and often combines her artwork with ancient Chinese quotes and sayings.

After a period of living in London, she moved to Monmouthshire in 1994 where she found artistic inspiration from her surroundings. But she is very clear about her identity. “Although I have spent most of my life living and working in London, and now Wales, I am essentially Chinese – nothing is going to change that,” she says.

Kuen Shan has been an artist for many years but it is only the past five years she has been writing books. In spite of this, her desire to write surfaced at an early age. “Language is fascinating, it’s absolutely fascinating,” she enthuses. “As soon as I could hold a pair of chopsticks, I had to learn to write.”

I ask whether her art and writing are closely linked. She is thoughtful, and concedes that they are both creative. But there is a difference. “With painting, the visual feedback is instant,” she explains. “You know straightaway if you’ve got the brushstroke right or not, whereas with writing it’s different. It’s very slow.”

So how long did it take her to write The Cat Who Loved Me? Stirring her tea, she tells me that she started jotting down ideas five years ago. “And how many times did I review the book, tighten things up? I can’t even remember!” she laughs.

I ask about her future plans and she assures me that her writing is here to stay. She has the bug now and she’s certainly not going to stop. But it looks as though there may be something other than cats on the horizon.

“I have an idea about my next book – my mother. My mother was a fascinating, very traditional Chinese woman … her life story warrants a book of its own, so that’s something I’m thinking about,” she says.

The Cat Who Loved Me – And Made Me Love Him is available from Amazon for £6.99 (paperback edition) and £3.08 (Kindle edition). Kuen Shan’s other book, Happy in My Shell, is available to buy from Kuen Shan’s website for £8, including p&p.

"A poem is never finished, only abandoned" -- Paul Valery